BaBa Black Sheep, Have you any Black Money? 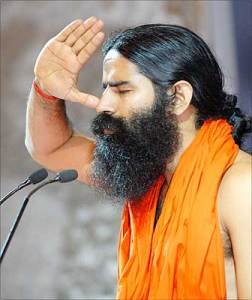 The weeks gone by have been a medley of three tales- a baba, some black sheep and a lot of black money.

When Baba Ramdev a yogi who has won the hearts and the wallets of millions chose to embark on what one speculates could be a political career, the weapon he chose was a strong and non negotiable one – corruption and black money. Call it opposition or attention seeking, Baba Ramdev’s arrival in the capital was sensational and his departure even more so,leaving behind a trail of many unanswered questions which the days to come will hopefully answer.

The black sheep (read politicians) in this country have had a field day feeding off each other’s follies and serving the public a stew made of politics, relegion, history and ethics. The ruling Congress which remains in power thanks to a masterstroke of democracy commonly referred to  as ‘a coalition’ chose the most undemocratic way of addressing a peaceful protest through brutal force. It forced Baba Ramdev out of the Capital but it could well force the UPA out of the government as it gave a thus far directionless opposition the chance  to ride on the plank of mass frustration highlighted by people of mass appeal, be it Anna who has begun to develop it or Ramdev who already had it.

Interestingly the blackest of all the corrupted sheep the civil servants escape attention and punishment.

Finally there is the black money, usually pushed out of the country or under the table it now runs the danger of being  pushed under the carpet between political hyperbole. The quantum of Indian black money stashed overseas has undergone several estimates the Baba’s version being by far the most adventurous but there is little doubt that if repatriated this money could substantially reduce our fiscal deficit or even turn it into a surplus. I would also significantly reduce our inflation while ensuring a double digit growth for a long time to come. It may not as Baba Ramdev claims make the rupee valued at 50 dollars but it could ensure that the poorest Indian gets at least 2 dollars a day to live on four times what he gets today.

Of course this is all wishful thinking, but it can be done.

The manner and speed in which Ramdev wants it done may not be desirable or possible but it still needs urgent attention. The move has been made and needs to become a movement. To become one it needs patience perseverance and sometimes even penance. It also needs pressure, ploy, propaganda and populism. But most of all it needs ‘people’ to make it happen.

Having said that, the questions remains, who is Ramdev? What authority has he? Are his methods right? Are his demands reasonable? These are questions which can be asked. However one cannot deny that he has lit another spark in what has always been at best an undying subject of disgruntlement and made us no better than a living corpse. The yogi would call it shavasana – the posture of a corpse signifying rest – a luxury we cannot afford in our fight against corruption.

Posted on February 21, 2011 by indodutchconnect

Best defined by the captivating scenes at Tahrir square, ‘uprising’ has in fact been the distinct economic feature of the new millenium.

Egypt  may have found a solution, for now, by removing Mubarak but the world economy, still grapples to find one. The ‘uprising’ has, in fact, been prevalent across

the globe where prices have been up and rising for various reasons. Starting with the sub-prime crisis in the US, followed by the depression, which led to the Fed pumping trillions of oxygen dollars to breathe life into the vegetating economy. This stirred things up and the situation improved, albiet at a less than desirable pace. However, it has also inflated prices!

Europe on the other hand, thanks to Greece and Iceland, saw an exchange crisis. Here too the bailout by its reluctant neighbours has given temporary relief from bankcruptcy, but certainly not from the rising prices.

China, having bitten off more than it can chew, is a victim of over heating and now tries to stem the inflationary rot by regular interest rate hikes.

Metal prices, which have seen a meteoric rise for the last 8 months will continue to do so. The winter chill had pushed up crude prices. Now the Egypt crisis has put oil on the boil!

For India, there is no respite. Prices continue to go up, thanks to supply side constraints and hoarding by middlemen. The RBI has used its interest tool six times in the last year in an attempt to check inflation. It has landed up checking growth. Growth has, in fact, slowed down as the third quarter financial reports reveal. Food inflation, however, continues to bulge at over 13 percent.

Uprising has different meanings when it comes to Egypt and the world economy and the solution process will be equally different. However the solution will have to come from the common word – pressure.

Solution? Egypt found it via the Internet. Time, then, to Google?

Read the full text of this article at www.indodutchconnect.com

Posted on January 12, 2011 by indodutchconnect

The first decade of the new millenium has brought India lots of growth, but at a very high cost. India has just recorded its highest level of inflation in the millenium. At the centre of it has been food, a basic commodity that now commands a premium.

Though only a fifth of our total produce comes from agriculture, three out of every four Indians depend on it for their livelihood. Then out of these three people, a majority of them spend almost 80 percent of their income on consuming basic food, which includes cereals, pulses, potatoes and onions. Food inflation, among other issues like scams and scandals threatens to be a serious political issue and a threat to India’s government.

So what has caused this situation? The classical economist would resort to textbook theories of demand pull or cost push inflation or both. In India’s case, it is neither and is more systemic. The Indian farmer feels cheated as he is paid too little, the Indian consumer feels cheated as he pays too much. And the cheat is the middleman; too many of them who resort to hoarding, cartelisation and distortion by creating artificial scarcity.

The obviously solution is to cut the middleman and improve supply. For a start, we can take these steps.

Reduce and improve the supply chain, add value: Get big food chains to reach the grower and the consumer in the shortest possible time. This needs aggressive investment in logistics and infrastructure. Encouraging FDI would certainly help. Proper storage facilities coupled with timely distribution need to be planned and funded at the national level first and then at the state level. Promotion of food processing would help reduce the wastages and offer farmers better prices.

Use appropriate technology: Upgrade food production methods to make them more reliable and efficient and improve irrigation techniques to make production less dependent on monsoons. Better seeds and manure would help as well.

Offer incentives to grow food crops: The farmer needs to be provided incentives to stick to producing basic food crops so he stops substituting these with better options.

The government has enough food for thought. It needs to now act and act fast!

The Netherlands has plenty of experience and expertise as one of the largest exporters of food in the world. India needs to find innovative and effective ways to tap this expertise. The government needs to make it easier for Dutch (and other foreign) companies to bring in urgently needed processes, technology and know-how to help our ailing food sector, NOW!

Read the full article on www.indodutchconnect.com

The Connect Blog is here!

Posted on January 12, 2011 by indodutchconnect

For starters, we’re focused at talking to the investor community in the Netherlands about the state of the Indian economy and how 2011 is going to look for companies interested in starting or expanding operations in India.